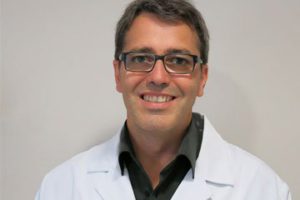 Dr. Alfredo Casaudoumecq Martí made the medicine and surgery degree course at the University of Barcelona (Hospital Clinic – 1993), and made a stay in Edinburgh (St John´s Hospital).

Later he specialized in Plastic, Reconstructive and Aesthetic Surgery after obtaining the position through the opposition MIR at the Vall d’Hebron hospital (1993-1998) where he worked as deputy from 1999 to 2005, alternating his position both in the Burns Unit as in the Service of Plastic Surgery.

Since 2006 he is part of Plastic Surgery Service at Hospital Clinic, where he is responsible for the program of treatment of sequelae of morbid obesity (Abdominoplasty, mammaplasty, cruroplastias, braquioplastias…) and also collaborates with the unit of mammary pathology of the hospital, in the field of breast reconstruction in patients affected by breast cancer.

In addition he is a collaborating teacher in the Plastic surgery subject in the faculty of Medicine of the University of Barcelona.

This website uses cookies to improve your experience while you navigate through the website. Out of these, the cookies that are categorized as necessary are stored on your browser as they are essential for the working of basic functionalities of the website. We also use third-party cookies that help us analyze and understand how you use this website. These cookies will be stored in your browser only with your consent. You also have the option to opt-out of these cookies. But opting out of some of these cookies may affect your browsing experience.
Necessary Always Enabled
Necessary cookies are absolutely essential for the website to function properly. This category only includes cookies that ensures basic functionalities and security features of the website. These cookies do not store any personal information.
Non-necessary
Any cookies that may not be particularly necessary for the website to function and is used specifically to collect user personal data via analytics, ads, other embedded contents are termed as non-necessary cookies. It is mandatory to procure user consent prior to running these cookies on your website.
SAVE & ACCEPT